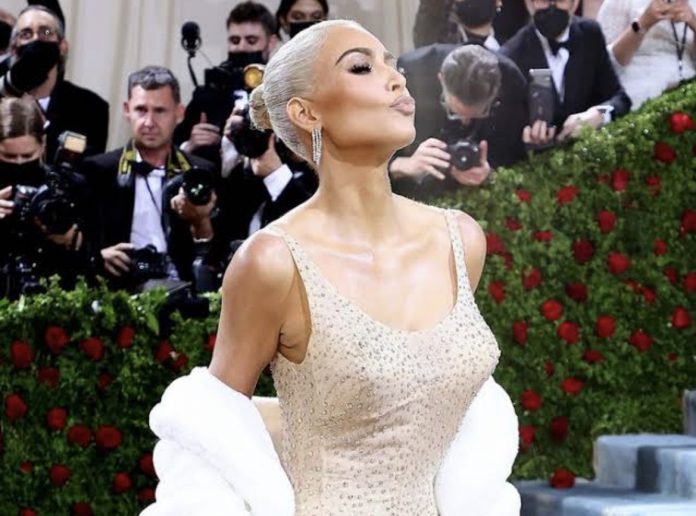 Reality Tv celebrity, Kim Kardashian has denied damaging Marilyn Monroe’s iconic dress. This comes after the rumour that Kim had ruined the dress.

It will be recalled that Kim wore the dress to the 2022 Met Gala in May. She further exasperates the fury of many after disclosing that she has gone through an extreme weight loss before fitting into the dress as it could not be altered.

The iconic dress was worn by late Hollywood celebrity, MarilynMonroe, during her music performance for former US President, John F Kennedy on the event of his 45th birthday.

Marilyn Monroe collector, Scott Fortner, alleged that there was permanent damage done to the dress after the reality Tv star had worn it.

Further disseminated some photographs through his Instagram page to show what happened to be a stretched and buckled fabric as well as missing glasses on the back of the dress.

In an interview with TODAY Show on Tuesday, Kim Kardashian admitted said she wore the dress for four minutes, after which it was carefully taken off her by handlers.

She said, “I showed up to the red carpet in a robe and slippers, and I put the dress on, on the bottom of the carpet, then went up the stairs. I probably had it on for a total of three minutes, four minutes, and then I changed at the top of the stairs.”

Tracey Boakye has been slammed by fans for running her husband’s Instagram account to shower praises on herself.

“I can’t do this anymore, I give up” — Influencer Papaya Ex bemoans after spending N50k on data weekly

Kibicho urges Kenyans not to crowd at polling stations after voting