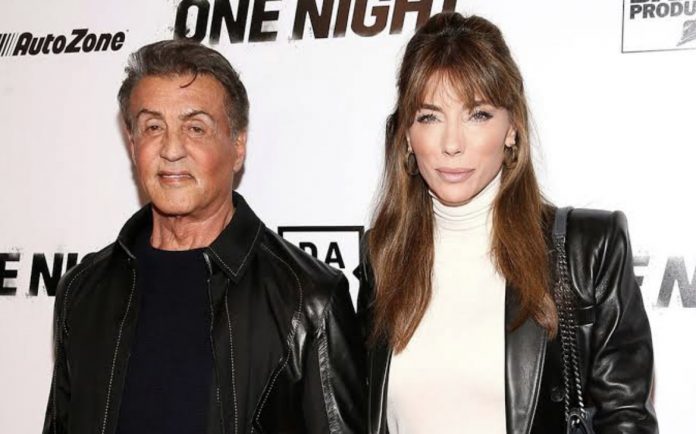 American “Rocky” actor Sylvester Stallone and his wife, Jennifer Flavin, are breaking up after 25 years of marriage.
Flavin filed for divorce in Florida last Friday, August 19, 2022 accusing the actor of moving assets from marital funds.
However, It’s still unclear why she wants a divorce but the issue was detected earlier because of recent tattoo concealment by his husband after removing an image of her face from his arm, causing a massive stir over social media.
Flavin wants their house in Palm Beach while making it clear she believes the Hollywood star is hiding marital assets.
In the divorce documents, Jennifer says, “Upon information and belief, the husband has engaged in the intentional dissipation, depletion and/or waste of marital assets which has had an adverse economic impact on the marital estate. Pursuant to Section 61.075, Florida Statues, equity dictates that the wife be compensated and made whole by receiving an unequal distribution of the marital assets in her favour. Moreover, the husband should be enjoined from, selling, transferring, assigning, encumbering, or dissipating any assets during the pendency of proceedings.”
Additionally, Jennifer wants to restore her last name, Flavin. She wants a judge to put the brakes on Sly moving assets from the marital pot.
Meanwhile, Jennifer took to Instagram to post a photo with the three daughters she shared with Slyvester, and captioned it, “These girls are my priority <3 nothing else matters. The 4 of us forever.”
Jennifer and Sylvester got married in 1997.

BBNaija star, Laycon, blast troll who said “he is not worthy to be called a rapper”

Mkhize could exploit North West ANC infighting to increase his...

People thought I will end up in rehab – Blaqbonez

“Stop flooding my timeline with someone else sex stories” – Seun...