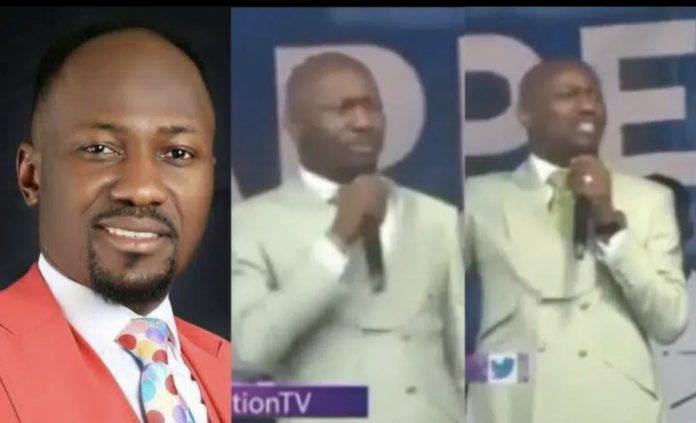 Nigerian Clergyman, Apostle Johnson Suleman has finally reacted to the sexual scandal leveled on him by popular Controversial blog, Gistlover.
This is coming after popular faceless blogger, Gistlover dropped the names of some Nigerian actresses who have reportedly been involved with Apostle Johnson Suleman intimately.There had been a series of allegations leveled against Apostle Johnson Suleman after videos and messages of ailing actress Halima Abubakar surfaced online
Amid the allegations and the issues between Halima Abubakar and Apostle Suleman, Gist lover via its page dropped the names of some Nollywood actresses who the blog claimed had slept with Apostle Johnson Suleman for money.
Names like Shan George, Lilian Bach, Iyabo Ojo, Ruth Kadiri, Mercy Johnson, Chinyere Winifred, Larriet Omo Brish, Vivian Metchie, Georgina Onuoha, Ini Edo, Joy Ogbunu, Angel Okorie, Mary Uranta, Queen Nwokwoye, among others were mentioned.
While reacting, Apostle Suleman who said he has been busy with his church crusade stated that he would be the end of Gistlover’s blog and the list of actresses mentioned is not long enough, urging the blogger to make it longer.
He described Gistlover as a fool (ode) for dragging a him like a generator.
Furthermore, Suleman declared that he will be the one that will disappear the gossip blog as the owner of that handle has entered his trap.

GUTA calls on Bank of Ghana to revise investment laws

Prof. Olusola Oyewole on ‘The Quest for Transformational Leaders in Africa’...

I make albums my energy, emotions