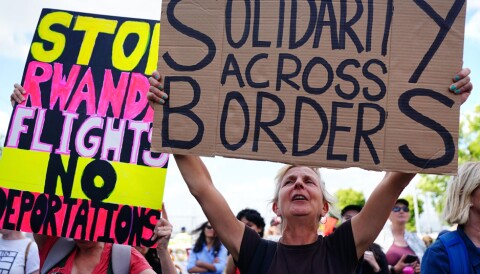 The first flight moving asylum seekers to Rwanda is set to leave the UK after a legal challenge failed to stop the controversial deportation policy.

The archbishops of Canterbury and York also condemned the plan, describing it as “immoral” and stating that it “shames Britain”.

However, a Government spokesman opined that the policy was compliant with Britain’s national and international obligations and was necessary to combat the activities of the human trafficking gangs.

Ministers argue that only firm action will deter migrants from continuing to attempt the dangerous Channel crossing to try and reach the UK.

On Monday three Court of Appeal judges upheld a High Court ruling last week that the removals could go ahead, rejecting an appeal by two refugee charities and the Public and Commercial Services union (PCS).

But it was unclear how many asylum seekers would be on the aircraft with individual appeals against deportation which are expected to continue on Tuesday morning.

Care4Calais said that altogether, there are 24 individuals the Government wants to remove whose tickets have been cancelled.

Three further challenges brought by individuals who face removal on the first flight are expected to be heard at the High Court on Tuesday.

A Government spokesman acknowledged that further legal challenges and last-minute claims could be expected, but insisted it would press on with the policy.

“We welcome the court’s decision in our favour, and we will now continue to deliver on progressing our world-leading migration partnership which will help prevent loss of life and break the business model of vile people smugglers,” the spokesman said.

“Rwanda is a safe country and has previously been recognised for providing a safe haven for refugees – we will not be deterred in delivering our plans to fix the broken asylum system which will ultimately save lives.”