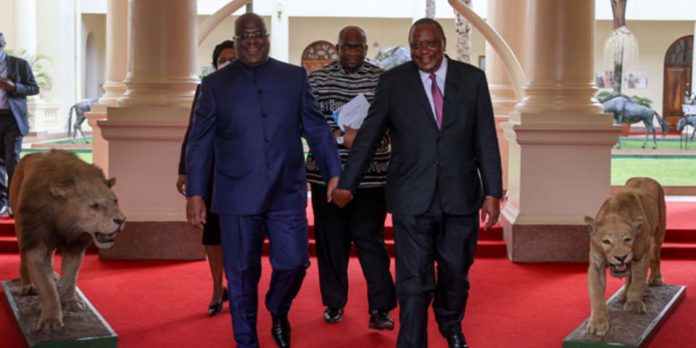 The Kenyan presidency stated on Thursday that Nairobi will host talks between rebels operating in the Democratic Republic of Congo’s violence-torn east and the Kinshasa government.

The mineral-rich DRC is struggling to contain dozens of armed groups in the east of the nation, many of which are a legacy of two regional wars a quarter of a century ago.

Millions of people died from violence, disease or starvation in the 1996-7 and 1998-2003 Congo Wars — a conflict that enmeshed countries from around east and central Africa.

On Thursday, the leaders of Kenya, Uganda, Burundi, Rwanda and the DRC met in Nairobi to discuss the crisis, with Kenya’s presidency later announcing that the Kinshasa government would hold a “consultative meeting” with the rebels on Friday.

Kenyan President Uhuru Kenyatta “graciously agreed to host and provide logistical support for the consultations in Nairobi”, it said, without naming the rebel groups invited to the meeting.

The Nairobi talks come barely a month after the DRC was admitted to the regional East African Community (EAC), a seven-nation bloc with a single market allowing free trade and movement of citizens.

The Kenyan presidency stated that the leaders were looking at establishing a regional force to neutralise rebel groups operating in the region.

“The meeting directed that planning for such a force commence with immediate effect,” it said.

All foreign armed groups in the DRC — a nation of some 90 million people — were aso urged to disarm immediately and return to their countries of origin.

Any groups who failed to cooperate with the directive “would be considered as negative forces and handled militarily by the region”, it added.

The M23 group, which emerged out of an ethnic Tutsi Congolese rebellion that was once supported by Rwanda and Uganda, clashed with government troops in the Congo’s east before announcing a retreat this month.

Meanwhile the Allied Democratic Forces (ADF) rebel group — which the so-called Islamic State describes as its local affiliate — has been blamed for thousands of deaths in eastern DRC as well as a spate of bomb attacks in the Ugandan capital Kampala.

Sword swallower pierces his abdomen, liver and loses part of his lung during practice

Lady going blind after tattooing her eyeballs to copy an influencer

Gov’t laments over 60% base pay demand by Organised Labour

The Fruits of Life in Egypt: Stories from a Fakahani

North Korea bans Citizens from showing any Sign of Happiness for...