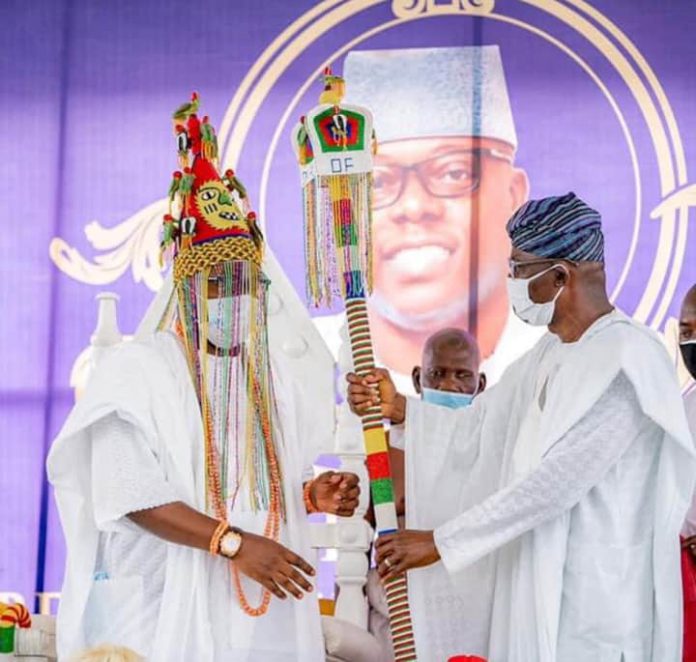 Governor Sanwo-Olu in a statement issued by his Chief Press Secretary, Mr Gboyega Akosile on Thursday, described Oba Lawal, the immediate past Lagos State Commissioner for Agriculture, as a seasoned administrator who has used his knowledge and experience to bring about an agricultural revolution in Lagos State.

The Governor added that Oba Lawal, during his tenure as Honourable Commissioner in different ministries between 2009 and 2020 displayed a high degree of honesty, dedication and professionalism to service in the public sector, contributing his quota to the growth and development of Lagos State.

He said the traditional ruler, who retired voluntarily as a Superintendent of Police in 2000, left the Nigerian Police Force with impeccable records, exhibiting the true spirit of royalty in him.

He said: “Oba Omogbolahan Lawal has dedicated his adult life to the service of the people both as a police officer and later in politics, serving three governors passionately as Honourable Commissioner to deliver democratic goods to the people of Lagos before becoming a traditional ruler.

“Oba Lawal’s work as Senior Special Assistant and later Commissioner for Agriculture and Cooperatives to Governor Babatunde Fashola (SAN) on special projects as well as Commissioner for Housing during Governor Akinwunmi Ambode administration are evidence of your knowledge, creativity and innovation.

“During his service as Honourable Commissioner of Agriculture in our administration, Oba Lawal brought positive energy and transformational change to the agriculture sector in line with our THEMES agenda.

“Oba Lawal also worked assiduously with other cabinet members to deliver our government’s COVID-19 relief package to over a million households in Lagos, including people with disabilities.

“On behalf of my family and the good people of Lagos State, I wish you a happy birthday and pray that the Almighty God continues to bestow on your Majesty, wisdom for a continuous reign of peace, prosperity and love in Iru land.

“May you witness many more fruitful years and decades on the throne of your forefathers for the continuous service to humanity.”