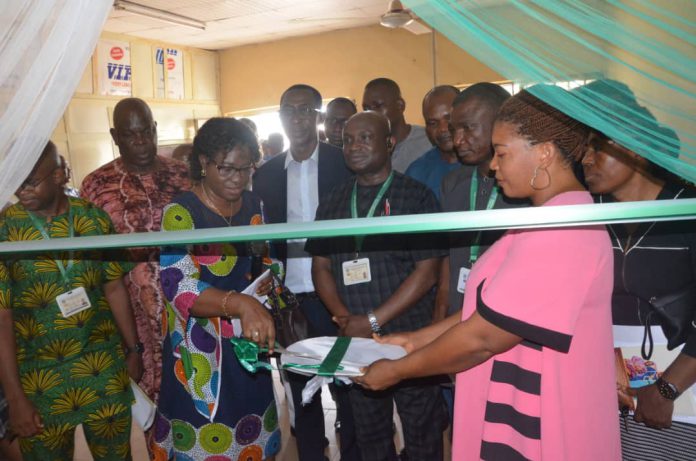 Professor Elom made the commendation at the Commissioning ceremony of the Intellectual Property and Technology Transfer Office (IPTTO) established by NOTAP in AE-FUNAI.

According to a statement signed by Raymond Ogbu on behalf of the agency said the Vice-Chancellor noted that the commissioning of IPTTO in the institution was a clear demonstration of commitment by the Management of NOTAP and by extension, the Federal Ministry of Science, Technology and Innovation to stimulate innovative activities in the University.

He said that as a university, the school was irrevocably committed to academic excellence benchmarked on research and development (R&D) activities.

He added that it was the desire of his administration to encourage and promote product-driven research geared towards providing solutions to the array of societal challenges.

The VC used the opportunity to express appreciation to the Honourable Minister of Science, Technology and Innovation, Dr Ogbonnaya Onu for supporting the collaboration between the University and NOTAP, which according to him, gave birth to the establishment of IPTTO in the institute, in addition to the upgrading of the Chemical Engineering Laboratory.

He, however, expressed hope that lecturers, researchers, inventors and innovators within the university environment and the southeast zone in general, will benefit from the Office in dealing with issues of copyrights and patents as regards their research and innovation ideas in a seamless manner.

Earlier in his opening remarks, the Director-General of NOTAP, Dr DanAzumi Mohammed Ibrahim who was represented by the Director Corporate Planning department of NOTAP, Mrs Idoreyin Imiyoho said that the Office was established to regulate the inflow of foreign technology into the country and at the same time, promote indigenous technologies.

The DG said that Nigeria has a weak intellectual property (IP) culture which according to him, the establishment of IPTTOs across Nigerian knowledge institutions is aimed to improve.

He added that knowledge institutions are the hub for inventive and innovative activities therefore, there was the need to create awareness on the importance of IP to the socio-economic advancement of the Country.

Dr Ibrahim stated that what distinguishes developed from developing countries was the quality of goods and services emanating from their research undertakings. He added that the strength of nations was no longer measured by the number of mineral resources but by the level of human capital development.

He urged researchers to engage more in demand-driven research that will attract venture capitalists rather than conventional research for career progression.

He noted that the global ranking of Universities was based on the level of research outputs of such institutions and not necessarily the number of publications, adding that while it was important to share ideas through publications, researchers should as a matter of priority patent their inventions before publishing so as to reap financial benefits.

The DG used the avenue to preach for synergy between academia and the industry, noting that research and development results can hardly metamorphous into goods and services without collaboration between the two bodies.

The business of Interior Designs, Decor, as well as Coordination is...

Mass looting in Nigeria as Hoodlums, Thieves take the reins