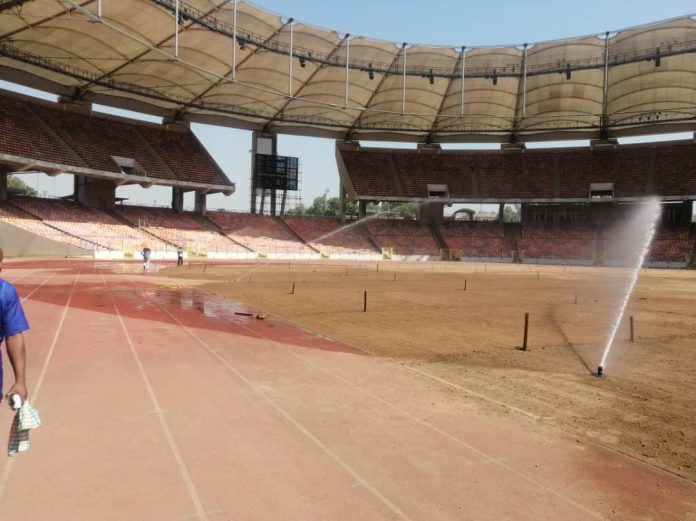 The contractor handling the Moshood Abiola National Stadium, Abuja, has announced that the stadium will become operational and good enough to host football and other sporting activities by next month, May.

Fielding questions from newsmen during an inspection of the project at the stadium on Monday, the Executive Director, ARON Nigeria Ltd, Architect Adeniji Adesoji, revealed that the seed for the grass imported from Europe which will be planted this week will be lush green by the end of this month.

Speaking before conducting newsmen from one location to the other, Adesoji lamented that the COVID-19 pandemic delayed the contract completion date, assuring that the stadium will become fully operational in a month’s time.

“The contract was awarded last year under the programme of Adopt-a-Pitch initiative, the brainchild of the Minister, Mr Sunday Dare. The contract comprises the main pitch, the nursery, the scoreboard and the control room. We took over the project on August 31, last year and ever since then, we have been working according to the programme specifications”.

“We would have handed over by now but we had issues with the COVID-19 pandemic. This is because the main pitch involves us bringing into the country, hybrid seeds from Europe. It affected us. All the components of the scoreboards to be imported from Europe too, also affected us”.

“As I speak with you, we had issues with the pitch, particularly the underground system like the sprinkler, but with the help of FMYSD, we have surmounted. The underground drainage system has been completed while the sprinklers have arrived the Lagos airport ready to be brought into Abuja to be installed this week”.

“The seeds are also in the country and we plan to start planting the grass seed this week and by the end of this month, the grass will be lush green at both the main pitch and the nursery”.

“As for the scoreboard, the components are at the Lagos airport waiting clearance and once they arrive, we will install. We have also installed all the damaged cables. The ministry were also magnanimous with us in taking over the control room and putting it under good control. The control room is now functional and once the scoreboard comes, we will install, test and handover”.

“The stadium will be completed in a month-and-a-half. Yes, the challenges affected the financial implications but since the contract is a fixed one, we had to still continue working based on the terms of the contract. We also regard it as a sacrifice we have to make, as a Nigeria company. We want to show that we can do it. The good thing is that there is room for service agreement because the contract is in two phases, which involves two years maintenance,” he revealed.

Meanwhile, the Ministry of Youth and Sports Development has dispelled the speculation that the stadium is in a state of total neglect.

Briefing newsmen during the inspection of facilities, Engr Alanamu Abolore, maintained that while the facilities were recently used in hosting sporting activities, the swimming pool is in good shape and has been put into use by the Aquatic Federation of Nigeria.

Lewandowski: I laughed when I heard cries of ‘Hala Madrid’

Messi Unsure of His Future with PSG

Man Utd To Hire Someone To Polish Trophies