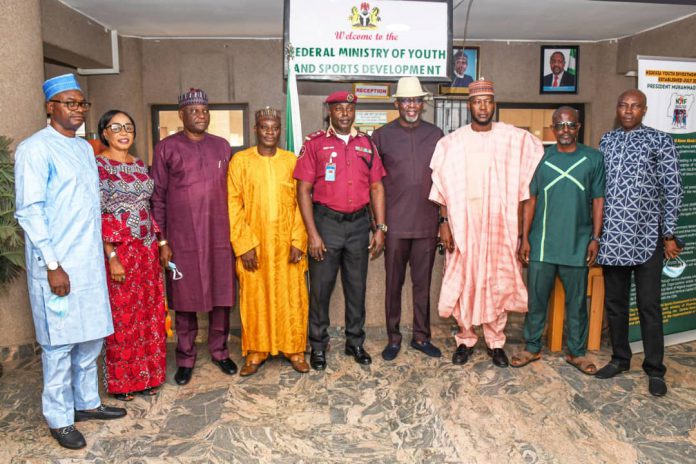 The composition of the BFN as well as the in-house election of its principal officers had been stalled following a court action by one Kenneth Azuine who was not a party to the election into the board.

But on the eve of the election, just as it was for other sports federations, he got an interim court injunction stopping the electoral processes and composition of the BFN board. With badminton in the country grounded to a halt, the Nigeria Ministry of Sports opted to set up a caretaker committee

On Monday, October 18, 2021, the Permanent Secretary, Alhaji Ismaila Abubakar who stood in for the minister of sports, Sunday Dare sworn-in a 13-man caretaker committee.

The oath of office was administered by Foluso Akinlonu, a lawyer and Director Legal at the Sports ministry. The non-composition of the BFN as a fallout from the legal issue was already taking its toll on the sport in the country.

For instance, the 6th Lagos International Badminton Classics which is the biggest Badminton World Federation sanctioned championship in Africa had to be cancelled as the world body had no organisation to relate with in the country.

The championship which the immediate board of BFN had scheduled to run from 3rd to 6th November 2021 was shelved because of the lacuna in the running of the sport in Nigeria.

Also, Team Nigeria was withdrawn from the All Africa Senior Championship which is scheduled to take place in Uganda from 21st to 28th October 2021. This is because there is no board in place to handle preparation of the team for the event.

Another loss the country incurred owing to the non-composition of a board is the poor ranking the country’s players will have to contend with.

It is learnt that Nigeria is not in good standing with the Badminton World Federation (BWF) because the country was unable to fill and return the schedule A form for updating membership of MAs after the original deadline of 30th September and 11th October which was the extension given Nigeria to update its membership. Filling the schedule A form entails entering details of the board.

The participation of two Nigerian players who qualified for the world championship in Spain in December is also threatened as there is no board in place to handle preparation.

Owing to the cancellation of the Lagos International as well as the withdrawal of Nigeria from the All Africa Senior Championship in Uganda as a result of the absence of a board, Nigeria will lose two votes out of its voting strength during the AGM next year.

The others are Tunde Kazeem, George Shitta, Etuku Tenimu, Esther Gidado, Malik Anas, Amb Yahaya Yusuf and Grace Gabriel.
The chairman of the committee, Orbih said that the setting up of the committee was a good development as it will attempt to redeem the lost ground occasioned by the lingering issues.

He told the Sports Village Square that he will abide by the counsel offered by Alhaji Ismaila Abubakar, the Permanent Secretary at the ministry that he should reach out to all stake holders to gain all lost grounds. This he said will also include the aggrieved parties.

Usyk Signs Up Joshua’s Ex-Sparring Partner Ahead Of Rematch

2023 General Election: US to restrict Visa of those promoting violence...

Maurizio Sarri and Jorginho could reunite at Napoli this summer, according...