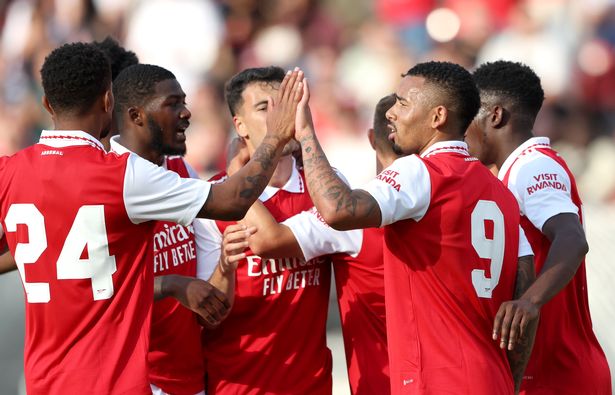 Arsenal striker Gabriel Jesus affirmed that he “feels at home” at the Emirates Stadium after helping the Gunners to a dominant 3-1 win over Tottenham Hotspur in Saturday’s North London derby.

The 25-year-old had already made a stellar start to life in North London with four Premier League goals in seven games and was a constant threat in the final third against Spurs.
Jesus scored Arsenal’s second goal of the day just after half time to restore their one-goal lead, reacting quickest after Hugo Lloris had spilled Bukayo Saka’s shot into a dangerous area.
Cristian Romero failed to deal with the danger and ended up poking the ball back into the direction of Lloris, and it squirmed under the Frenchman’s grasp before Jesus poked home into an empty net.
Speaking to BT Sport after the game, Jesus expressed his delight at finally scoring a derby goal in the Premier League and affirmed that he has been “really happy” in North London so far.
“To be honest it’s the second time I scored in a derby. The first was for Brazil against Argentina. I’m very happy, I want to score in every game and the way the team played from the first minute showed how we wanted to play,” Jesus said.
“We deserved to win, I don’t know how many chances we created. I am feeling at home because of the guys, the staff, the club and it’s helped a lot. I’m really happy here and we are in a good way.”
Before Jesus struck his fifth goal of the Premier League season, Thomas Partey had given Mikel Arteta’s side the lead with a magnificent long-range effort into the top corner before Gabriel Magalhaes brought down Richarlison in the penalty area.
Harry Kane stepped up to convert the spot-kick – his 100th goal away from home in the Premier League – but Jesus poked home in the second half before Granit Xhaka added a third for the hosts, and Tottenham’s day went from bad to worse when Emerson Royal received a straight red card for a studs-up tackle on Gabriel Martinelli.
Xhaka was also presented with the man of the match award after his well-taken finish past Lloris, and he believes that Arsenal were the stronger of the two teams right from the first whistle on Saturday.

Uruguay beat Ghana again as both team bows out

Olu of Warri Meets FIFA President Infantino, Others In Qatar

The biggest prison in the world for women is marriage and...

5 players Liverpool should target to help provide cover up top