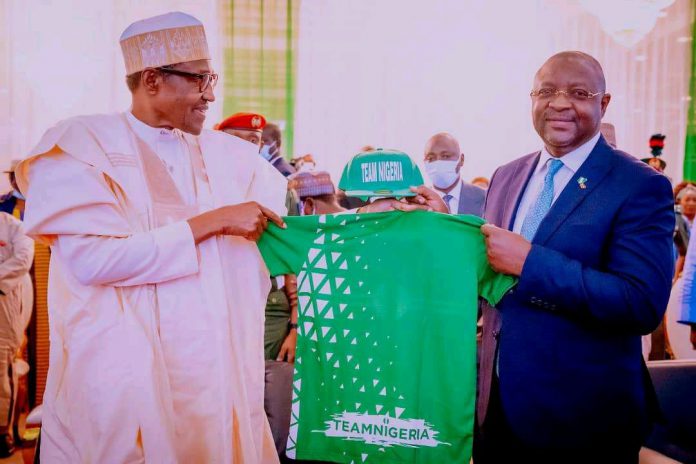 The Minister of Youth and Sports Development, Sunday Dare, on Thursday, explained that the decision to shutdown the League Management Company (LMC) was not connected to the incoming Nigerian Football League elections slated for 30th September, 2022

This is even as he disclosed that the Nigeria Football Federation (NFF), under the Muhammadu Buhari’s administration has received in excess of N16 billion.

Speaking at the 51st session of the State House Ministerial Briefing organized by the Presidential Communications Team, at the Aso Rock Villa, Dare, explained that shutdown of the Abuja head office of the League Management Company on Thursday was the government’s last resort to salvage the country’s football.

Recall the operatives of the Nigeria Police Force had stormed the office of the League Management Company in the capital city of Abuja to seal it up.

The Federal Government had dissolved the LMC as the recognised operator of the Nigeria Professional Football League last Friday.

The Permanent Secretary of the ministry, Ismaila Abubakar, had announced that the government no longer recognised the LMC as the sole agency licensed to organise and regulate the Nigeria Professional Football League.

He premised the decision on the alleged maladministration of the League.

But fielding questions on the issue, the Sports Minister said the dissolution of the LMC was delayed for four months to allow for a workable solution.

Dare said “As at May 25, 2022. Mr. President approved the dissolution of the LMC and directed that the NFF should set up an Interim Management Company because of clear evidence that our league was in dire straits. Between May and August, we did not issue a directive because we wanted the Premier League to complete its season without any disruption. But also, during that period, the Ministry made efforts to speak with those in charge. We never got any response.

“As we sit here, our league is on its deathbed. We know the nature of our domestic league. And just yesterday (Wednesday) I got a letter from the club owners. I met with them two weeks ago. I also met with the female football leaders. There’s a letter that came on September 1, I only got it yesterday stating clearly that they have numerous problems with the LMC running the league. Unpaid emoluments, referees are not paid, staff are not paid.

“So, in May 2022, there was a presidential directive and as a ministry, we applied reasonable judgment and delayed that communication. But at a point when the league ended, and we saw the continuous decline of our football, we thought it was the right time to take the necessary action. And that was what we did. There’s no connection between that decision with the NFF election, it stands alone.”

The Minister who was at the State House with some of the country’s ace athletes including world record holder, Tobi Amusan and gold medalist, Ese Brume, thanked the President for being “supportive” to the sector, prompting Nigeria’s recent exploits in the athletics world stage.

“Mr. President has been extremely supportive. And I know what I’m talking about. When you run a budget of N2.1 billion for the Ministry of Youth and Sports. And then you have two or three major international championships, your budget is an envelope, you can’t go beyond it