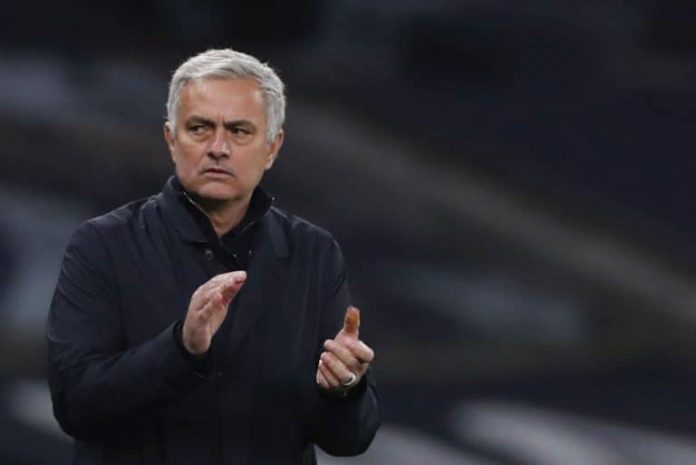 Jose Mourinho has emerged as a shock contender to replace Mauricio Pochettino at Paris Saint-Germain.

Pochettino’s stint in the French capital looks destined to come to an end, with reports swirling that the Argentine will be sacked in the coming days and weeks. PSG bosses are ready to wield the axe, despite winning the Ligue 1 title at a canter a matter of weeks ago.

It’s Pochettino’s failure in Europe that will ultimately cost the ex-Tottenham boss, with PSG crashing out of the Champions League in both of his seasons in charge. A decision on the current head coach’s future is expected next week, while Mourinho has emerged as a potential successor.

The Telegraph report that – for the second time in his career – ‘the Special One’ could replace Pochettino, having done the same at Spurs at the end of 2019. Mourinho’s credentials speak for themselves, particularly in European competition, recently becoming the first manager to taste success in all three UEFA competitions.

His Europa Conference League success with Roma at the end of last season was his fifth European honour, including a Champions League title apiece at FC Porto and Chelsea. There are perhaps few surprises then, that PSG president Nasser Al-Khelaifi could make an approach as their desperate bid to conquer Europe continues.

But according to reports in Italy, Mourinho is ready to snub any approaches from the Parc des Princes and stay in Rome, as he told reporters after ending his first season with the Giallorossi. “Now I am staying, there are no doubts. Even if some rumours emerge, I only want to remain at Roma,” he said earlier this month.

“We must understand what our owners, who are fantastic people, want to do next season, because this is history. But we can build a really strong project with honest professionals. We need to sit down and understand what the plan is for next season.”

However, should he go back on his word, he may need some clear-the-air talks with Lionel Messi, having previously gone on record and nailed his colours to the Cristiano Ronaldo mast. The two worked together at Real Madrid and in the debate between the greatest player of their generation, Mourinho felt his compatriot was the comfortable winner.