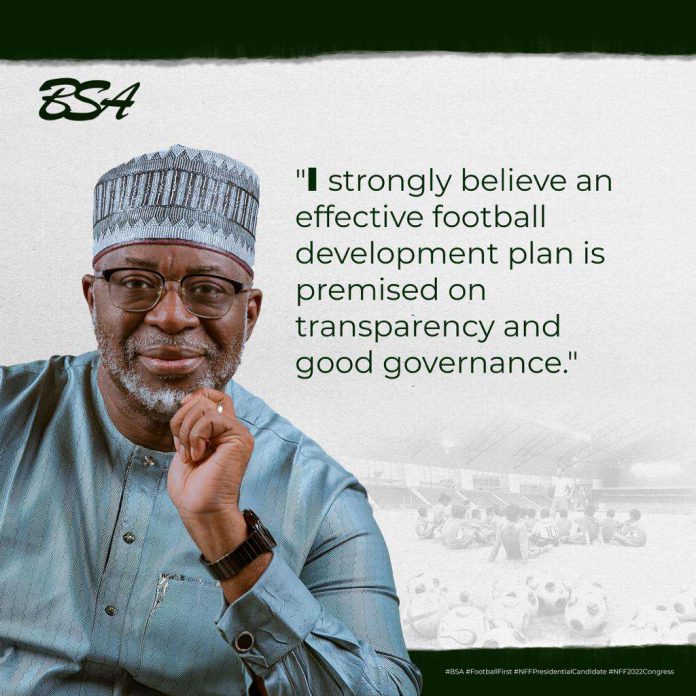 One of the leading aspirants in the September 30th Nigeria Football Federation (NFF) elections, Barrister Seyi Akinwummi says only an effective football plan can drive the beautiful round leather game in Nigeria.

According to Lagos State Football Association(LAFA) boss recently: “I strongly believe an effective football
the plan is development premised on
transparency and good governance.”

Recall Amaju Pinnick’s 8-year reign as NFF President has been riddled with corruption allegations, and qualification disappointments, as Nigeria football was in it’s lowest ebb.

Under his administration, the Super Eagles twice failed to make the AFCON in 2015 and 2017 and also qualify for the FIFA World Cup in Qatar at the expense of bitter rivals Ghana Black Stars.

Super Falcons who despite her ratings, had a poor performance at the recent Women’s African Nations Cup in Morocco, where she failed to make a podium finish
The CHAN Eagles also failed to make a mark in the continent as they were also knockout by Ghana during the qualification of the CHAN tournament billed for 2023 in Algeria.

The 2022 NFF Elective Congress is scheduled to hold on 30th September, 2022 in Benin City, Edo State.

Why Jack Grealish will not play against Newcastle for Aston Villa,...