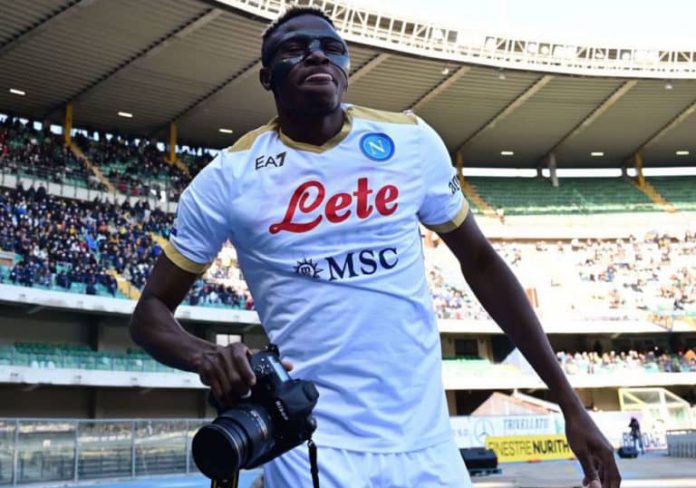 Napoli striker, Victor Osimhen has been listed alongside four players that are likely to replace outgoing Romelu Lukaku at Chelsea.

Lukaku sealed his return to Inter Milan on loan on Tuesday, having been blatant in his desire to return to the Serie A side after a miserable season, in which he scored just 15 goals in 44 appearances.

Boehly was initially reticent to allow the £97.5m striker to leave but was convinced by manager Thomas Tuchel that it was the best solution for all parties.

‘Inter will pay a fee of €8m plus add-ons’ and Lukaku’s ‘salary and performance bonuses have also been accepted’.

The report added that the 29-year-old will have his medical next week. This deal ‘will not have an option or obligation to buy’.

And now the Daily Mail claimed Boehly’s priority is to replace Lukaku, with five strikers ‘under discussion’ at the club.
Boehly is now working in tandem with Thomas Tuchel on transfers at Chelsea following the departure of director Marina Granovskaia.

Everton star Richarlison has emerged as a target for the Blues, along with Tottenham and Arsenal, with reports claiming the Toffees are willing to listen to offers in excess of £50m.

Robert Lewandowski is another player they are thought to be keen on, though the wantaway Bayern Munich striker has his heart set on a move to Barcelona.

The report claimed the other strikers being considered are Lille’s Jonathan David, Osimhen of Napoli and Sassuolo’s Gianluca Scamacca, with Arsenal also linked with the trio.