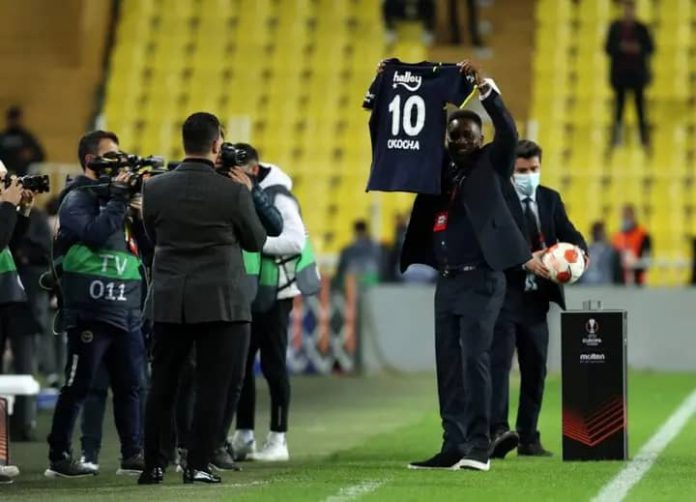 The 48-year-old retired from football in 2008, but his dazzling ability on the ball is still fresh in the hearts of many. During his playing days, the former Nigerian international played for both sides(Eintracht Frankfurt and Fenerbahce), making quite an impression.

Okocha dazzled for Eintracht Frankfurt between 1992 and 1996, and he was outstanding for the German side, as he often left defenders mesmerised with his amazing dribbling skills.

He scored 25 goals and assisted 18 in 116 games.After a successful four-year spell in Frankfurt, he moved on to Turkish side Fenerbahce on a 3.5million euros deal. That was where he caught former Arsenal and Madrid star Ozil’s eye.Donning the number 10 jersey, Okocha continued to mesmerise defenders and score jaw-dropping goals.

Despite his short stay during which he racked up 76 games, the former Nigeria international scored 32 goals and assisted 19. Ozil is not known for his dribbling abilities, but Okocha was a key influence in his career. The former Real Madrid man adored him so much that he treasured Okocha’s number 10 jersey while he was at Fenerbahce.

It was no surprise that the World Cup winner made sure to recognise his idol just before his side entertained Eintracht Frankfurt, who were also Okocha’s former employers.

However, the game was not of major significance to Fenerbahce, as despite their 1-1 draw, they dropped to Conference League football after they finished third in the group.Meanwhile, Eintracht Frankfurt topped the group with 11 points.

Why Bruno Fernandes winning PFA Player of the Year award would...