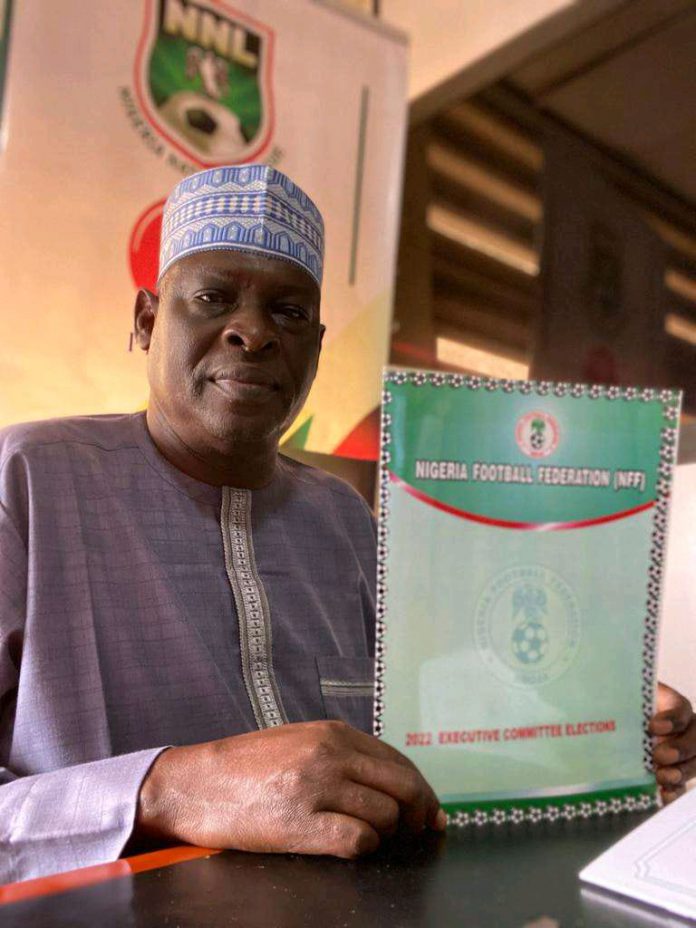 The Chief Executive officer, Nigeria National League, Sajo Mohammed Esq, has joined the race of aspirants seeking to occupy top seat at the Nigeria Football Federation ahead of the Friday 30th, September 2022 NFF Elections, to be held in Benin City, the Edo State capital.

Barrister Sajo who is seeking to be a member of the NFF Executive Committee representing the North East in the forthcoming dispensation on Thursday at the Wuse office of the Electoral Committee purchased the N250,00 (Two hundred and fifty thousand Naira) form designate for Executive board members.

Driven by his inbuilt desire for the sport, the Harvard University of Boston, Massachusetts USA trained security expert on national and international cases, believes the North East region need better representation on the board of the NFF.

“We need more players like Patrick Pascal,Manu Garba,Late Tunde Bamidele and Francis Monidafe for the various national teams and this can only be made possible by creating enabling environment for them”

Sajo believes he is eminently qualified to represent the zone “I am better equipped to provide such exposure with the right programmes and activities, my plan is to make the region a Haven for Football,I am coming with a revolution to have football played in every street in the North East”

“I want to salute the efforts so far from Alhaji Babagana Kalli and late Alhaji Musa Duhu for the region but I believe I have more to offer, we are in a democratic setting and I am offering myself as a personal sacrifice to help develop football in the North East”

“I have the concepts, links and contacts that will change many things in the North East and for sure my presence will be the antidote that we need to run “

Sajo said he would be encouraging more the private sector ownership of clubs ,inter- state football competition in the region, grassroots football development in order enable the enormous young talents that abound in the North East region. This he said is needed to take alot of young youths out of the street and meaningfully engage their energy positively. He promised to keep the region constantly busy with football development programs.

One other key area barrister Sajo hammered is on encouraging standard sports infrastructure in the region and capacity building of sports administrators and officials. According to him those are needed ingredients to developing sports in the North East which keys to his THEME of “Influencing Football Development in North East Nigeria” and as well as building bridges with football in the North East “

Mystery around the sale of municipal land in Pietermaritzburg

Ronaldo Wants Luis Enrique To Be Next Man Utd Coah