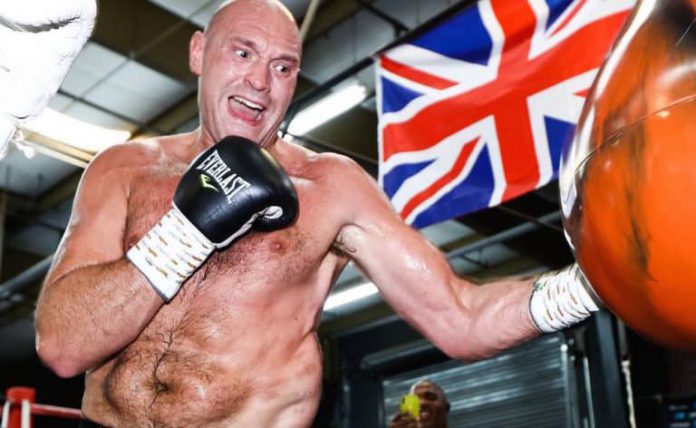 Tyson Fury has taken another jibe at fellow British heavyweight Anthony Joshua after he warned Joshua he would knock him out in three rounds. The Gypsy King’s claim against AJ came in an Instagram call out to another British heavyweight in Derek Chisora.

Chisora – who recently fell to defeat to Joseph Parker – claimed that if Joshua and Fury meet, the former’s ‘unbelievable’ power would prove all too much for the latter, and give him the advantage in the ring.

Fury of course was less than impressed by the comments, and took to his Instagram page to slam both Chisora and Joshua.

The Gypsy King said: “This is a message for Derek Chisora. ‘I’ve just seen that you said you think AJ would blast me out. Never in a million years.

Joshua is scheduled to take on Oleksandr Usyk in an eagerly-anticipated rematch this April, after he lost his three heavyweight titles to the Ukrainian in London last September.

During his call out video Fury then went on to slam AJ further, claiming Usyk will ‘knock him out’ come fight night.

He added: “So, Del, he ain’t got the bottle to fight Usyk again. Usyk will smash him next time, properly. Never mind beating him on points, he’ll knock him out.

“But listen, it only takes one man like me, there’s only ever been one man on these shores and he’s called the Gypsy King, a.k.a Tyson Fury.”

As well as his jibe on Instagram, the Gypsy King took to Twitter soon after to once again take aim at Joshua.

Fury – who has often claimed AJ is a ‘bodybuilder’ over a boxer – highlighted his unbeaten record compared to Joshua’s whilst uploading a picture of the pair’s differentiating physiques.

This is not the first time Fury found himself taunting his fellow British heavyweight over social media over recent days, after slamming Joshua for losing his belts to Usyk labelling the Brit a ‘big useless dosser’.

In a fiery rant on Instagram he said: “You know what I can’t believe? That AJ has gone and given Ukraine all the heavyweight belts back after all my hard work in relieving them. You big useless dosser.”

As a result the Gyspy King added that he should be the man to take on Usyk in order to bring back the three titles Joshua lost to British shores.

He continued: “You let a little man come up from middleweight and set about you and take all your belts.

“Now it is going to take a real British Lancaster Bomber like me to go and bring the belts back to Britain!

CARETAKER COMMITTEE SET UP TO RUN BADMINTON IN NIGERIA