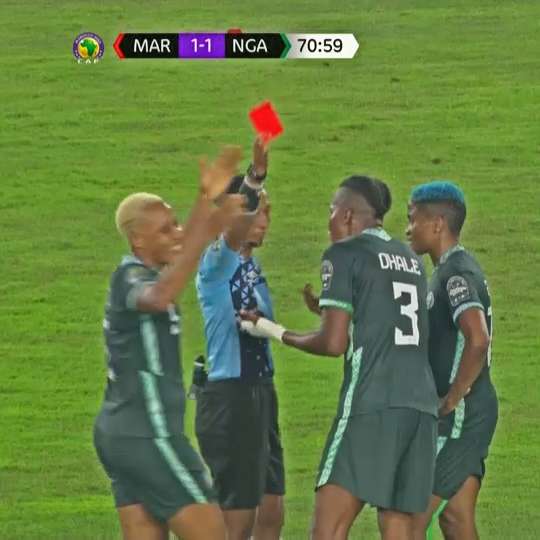 The Falconets head coach, Christopher Danjuma argued that the two red cards issued to the Super Falcons players in their semifinal clash with the hosts, Morocco were not politically motivated.

Halimatu Ayinde and Rasheedat Ajibade on Monday night were given the marching order after committing bookable fouls on their opponents to deplete the defending champions to nine women against eleven.

Super Falcons were beaten 5-4 on penalties after a 1-1 draw. Danjuma condenmed the players actions leading to the red card adding that it will serve as eye-opener for his ladies (the Falconets ) who are in Abuja preparing for the 2022 FIFA Women World Cup in Costa Rica which commence in August.

He said, “A lot of things are seen as eye-opener. In modern-day football, you dont tackle with your boot up. If VAR comes in, it is straight red card and will affect your team.

The thing is that, it is not as if it is political. We need to raise up our psyche and intelligence especially that of our players. When you go to major competition like that everything is in the eyes of the world unlike before.

He however commended the nine-time African champions for their zeal, doggedness and fighting spirit to hold their opponents for over 50 minutes despite being two women down .

“I will commend the Super Falcons for what they did yesterday (Monday) because it is not easy to play ten against eleven let alone nine against eleven. But it could be avoided, now that we have seen it, we use it for our players to learn from.”

The reigning African champions will face Zambia in the loser’s final in Casablanca on Friday.

Abramovich Yet To Put Chelsea Up For Sale