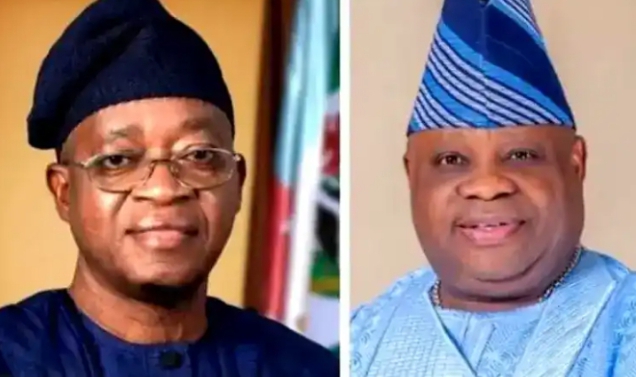 Aides to Osun State Governor, Ademola Adeleke, and his predecessor, Adegboyega Oyetola, yesterday, traded words over the alleged looting of the Government House after the expiration of the latter’s tenure.

Former commissioner for Information and Civic Orientation in the state, Mrs. Funke Egbemode, in a statement, described the new administration as confused for pinning the said looting on members of the previous administration.

But Governor Adeleke’s spokesperson, Olawale Rasheed, insisted that the Deputy Governor’s Lodge was not only looted but pillaged.

Egbemode said: “Governor Adeleke’s actions are futile attempts to soil the name and good governance established by the former helmsman of the state.

“We have seen the very laughable and shameless claims by the government of the day about the Government House being looted by the previous administration. The extent they have gone to peddle their falsehood is so preposterous that discerning minds are beginning to ask how a governor who completely renovated the Governor’s Lodge in June will stoop so low as to empty the First Aid box in the lodge.

“Accusing a man of Oyetola’s pedigree of taking away government house cooker and emptying bottles of methylated spirit taken away, says a lot of the accuser. It is beyond laughable. Perhaps the OSBC should deploy those cameras that Governor Adegboyega Oyetola approved money for them to buy, to show the world the visuals of the Government House that Oyetola inherited and the tastefully renovated and elegantly furnished house he handed over to the Adeleke administration.

Security Breach: Bayelsa United Gets 3 Points And Goals Deduction, To...

UK rapper Pa Salieu jailed over brawl that erupted after his...